Jim Clancy is the president of Branscomb Law. His practice focuses on complex commercial litigation. He also handles selected matters defending the firm’s clients in personal injury lawsuits. His experience includes million dollar verdicts for his clients and numerous significant settlements and dismissals. Jim’s greatest professional satisfaction is serving as a trusted advisor.

A West Point graduate, Jim is a former Armored Cavalry Captain. He served with the 1st Cavalry Division in Operation Desert Storm.

For years, Jim coached youth baseball and he still has strong opinions on teaching hitting and smart defense. He was also an avid golfer, whose attempt to find it in the dirt was blocked by a bum left shoulder. Now, his Saturday mornings are spent on a bike searching for speed and trying not to get dropped. 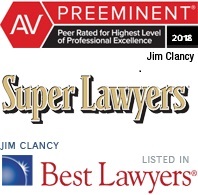