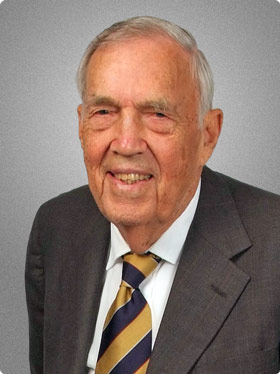 Harvie Branscomb, Jr., co-founder and of counsel to the firm, died on July 10, 2015 at his home in Corpus Christi. He started his life 93 years ago in Dallas, the son of Harvie Branscomb, Sr. and Margaret Vaughan Branscomb. His father was a professor of religion at Southern Methodist University who would go on to teach at Duke University and later become Chancellor of Vanderbilt University. Through his father’s influence, and having grown up in an academic environment, Harvie would become a fine teacher and mentor to numerous young tax attorneys, including Larry Gibbs, a future Commissioner of the IRS, and Kenton McDonald, a Special Assistant to the Commissioner.

Harvie attended Duke University, where he received his B.A. and graduated Phi Beta Kappa. After college, he served in the Navy in World War II. He received his law degree from Yale University in 1948. His uncle, Ben F. Vaughan, Jr., was a Harvard-trained lawyer from Dallas who had married a local girl and relocated his law practice to Corpus Christi. He needed help, and Harvie needed a job, and they went into practice together. As the years went on, Uncle Ben practiced less law and went more into the oil business. Harvie associated with other attorneys in the Corpus Christi area and began to develop his specialty as a tax attorney. He eventually established the firm of Branscomb, Gary, Thomasson and Hall, which became one of the largest full service law firms in South Texas. In the spring of 1975, Harvie and his partner, Ray Miller, left the Branscomb, Gary firm and established the firm that would become Branscomb, P.C.

He was also a long-time member of the American Institute of Certified Public Accountants. He was quite proud of his accounting background, and would often tell young tax lawyers who questioned his understanding of a tax matter that he once taught accounting at Yale Law School, so he knew what he was talking about.

In addition to his many professional achievements, Harvie was an accomplished sailor and pilot. He owned sailboats of all types and sizes and sailed them all over the Gulf of Mexico. He particularly enjoyed cruising the Caribbean. One of his favorite sailing stories was about when he sailed through a hurricane while cruising off the Florida Keys. He was a founding member and past Commodore of the Corpus Christi Yacht Club. He owned his own airplane and would use it to call on ranching clients in remote parts of South Texas until he became too old to fly.

He served his community as a trustee for the Art Museum of South Texas Endowment Fund, the Texas A&M Corpus Christi Foundation, the Warren Foundation and the Corpus Christi Industrial Park. One of his proudest accomplishments was the establishment of the Una Chapman Cox Foundation, which is dedicated to a strong, professional American Foreign Service. He served as its first President and was a trustee for a number of years.

Harvie was predeceased by his parents, Harvie and Margaret Branscomb of Nashville, Tennessee. He is survived by his wife, Mary Josephine, and his children and their families, Bennett Hill Branscomb and wife Katharine Schultz Branscomb, and their daughter, Margaret Josephine, all of Sonoma, California; Margo Branscomb and daughters Rachael Louise and Isabella May, of Centennial, Colorado; and Richard Lee Branscomb and children Richard Massey, Jack Henry, Kate Prudence and Mary Piper, of Austin, Texas. He is also survived by brothers Benjamin Vaughan Branscomb, of Birmingham, Alabama, and Lewis McAdory Branscomb and wife Constance Mullen, of La Jolla, California, and cousins Genevieve Vaughan of Rome, Italy, and Ben F. Vaughan, III and wife Daphne of Austin, Texas, and their families.